I came to the Pamirs in September 2013 with British writer Jamie Bunchuk to produce a film, in association with the Murghab Ecotourism Association, about a Kyrgyzstani-Tajik hunter and herder named Orozbek who lives in a small settlement just off the notoriously beautiful Pamir Highway and overlooking the verdant Alichur Plains of Eastern Tajikistan.

During the month we spent with Orozbek we had a rare and unforeseen opportunity to explore and document the unclimbed North and South Alichursky Mountains which overlook the Wakhan Corridor. Although this was not a climbing trip, I felt the first ascent and exploration potential we inadvertently encountered during this film project was worth sharing with others.

Our journey into the Alichursky Mountains involved a lengthy two-day overland hitch-hike and taxi share from Almaty in Kazakhstan, where we had been resting up after completing a two month crossing of Eastern Kazakhstan on horseback.

Our first day in Tajikistan saw us bumping and grinding our way down the Pamir Highway in a decrepit Lada driven by two young soldiers from Dushanbe. As I peered through tinted windows at the Chinese border fence cutting an arbitrary line through this expansive wilderness, I thought it comical how, amidst the pristine snow-capped peaks and uninhabited plateau, our little car was an absurd microcosm of the modern world – the stench of tobacco smoke and vodka breath mixing with ear-splitting Uzbek techno and the soldiers’ conversations of missing their girlfriends in the capital.

This somewhat surreal journey turned farcical when the Lada snapped an axle whilst descending the Ak-Baital Pass (4655m), resulting in four grown men screaming wildly, vainly clutching the dashboard, seats, hair and each other in the irrational and futile hope it might stop the truck rolling over into the ditch.

Eventually, after an overnight car-nap in the middle of the highway and the axle repaired with salvaged wire and zip-ties, we spluttered our way into Orozbek’s farmstead and yurt approximately five kilometres north of the Kyrgyz settlement of BashGumbez.

The first prominent area we spotted of interest for climbing was a series of 500m-high compact rock walls in the North Alichursky range overlooking Orozbek’s place. We affectionately nicknamed it the Orozbek Massif (Peak 4984m) in honour of our host. Intriguingly there were also extensive fracture caves throughout the massif, some accessible from the base, but others requiring technical climbing to access. During our reconnaissance along the base of these cliffs I would speculate that 600-800m-long rock routes could be possible for future parties in the region. It also has the distinct advantage of being only an hour’s walk from the highway. 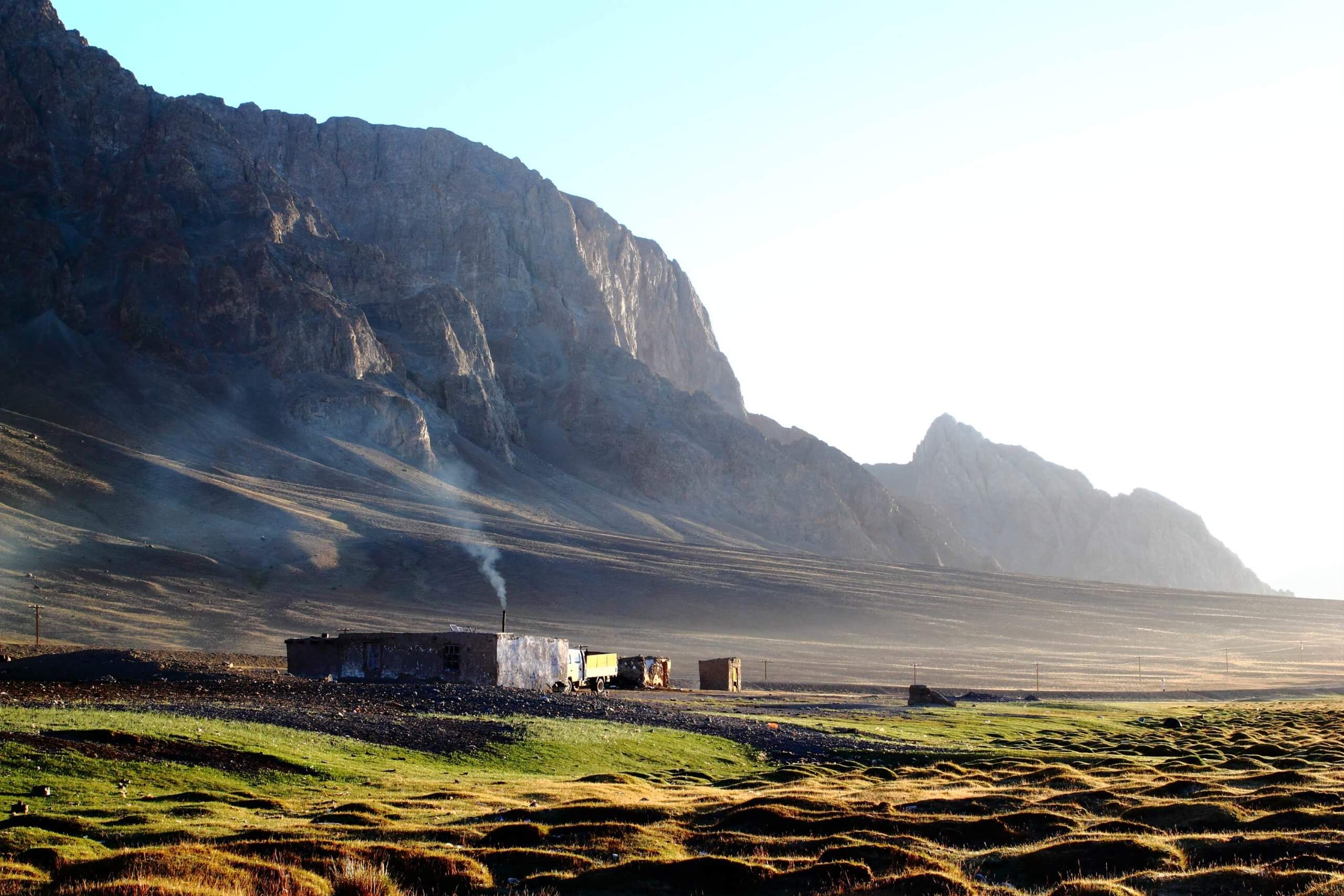 The longer we spent exploring this small pocket of eastern Tajikistan, the greater the secrets the land seemed to reveal to us; both in terms of its history and potential for first ascents. Already in our first two weeks we had made small archaeological discoveries in the caves of the Orozbek Massif, stumbled upon a Tsarist-era mine, sampled a cave-growing organic painkiller known as mumya and accidently ventured in to the uranium polluted Baz-Terek Valley.

The second region encountered with considerable potential was presented to us on a visit to the ancient caravanserai and long abandoned silver mining settlement of Bazar-Dara. Accessing this area requires a UAZ/4WD at a cost of $250 – $500 from Murghab. The entry point to start the off-road jaunt is via a northerly running road up an unnamed valley located near to the distinct hilly mound of An-Balik (4196m). Two hours up this valley saw us at the top of the 4864m Bazar-Dara Pass and another three hours winding our way down a valley of the same name towards the caravanserai. 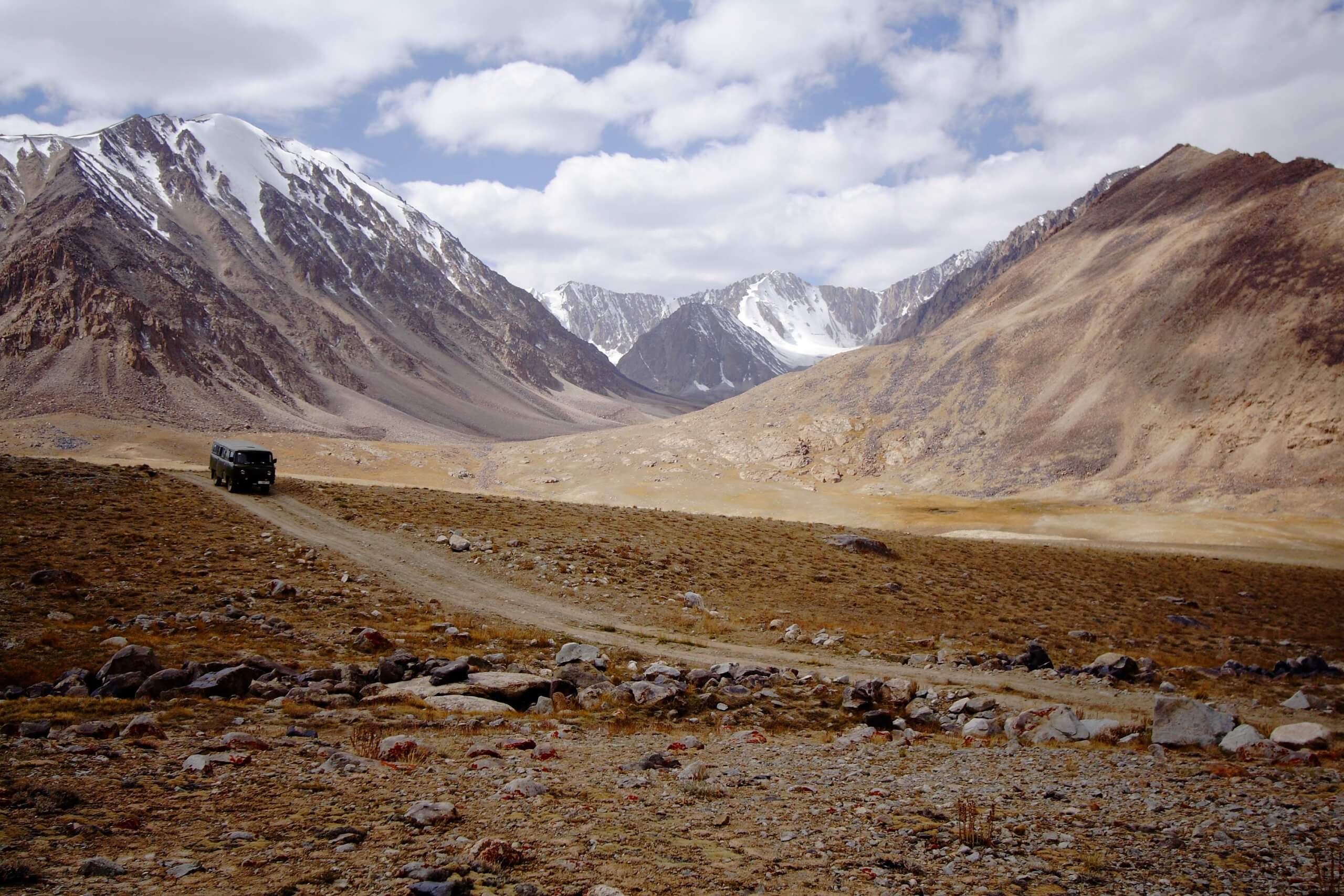 According to Soviet maps the nearest peaks to this region that may have been climbed are Peak Trezubets (5845m) and Peak Skahssmy (5781m) which are located 10km to the east within the Uzengyu Niazek Mountains.

Within the Bazar-Dara sector of the North Alichursky Mountains we encountered five valleys rolling outwards in a north-easterly direction. The first two valleys were up to three kilometres long and feeding a glacial lake that would be ideal for a base camp. Following either of these will lead to four to five unclimbed peaks, the highest in the region being Peak 5617. The three valleys to the north are somewhat drier, shorter and much less prominent, although there are significant granite slabs up to 500m high at the head of these valleys, which could make for great multipitch alpine rock routes. Alternatively these valleys would provide ideal access to approximately four unclimbed ridges and summits over 5000m. It would also be possible to site a camp near to the caravanserai itself and access these peaks via two short glaciated valleys, one of which leads up to the ancient silver mine! 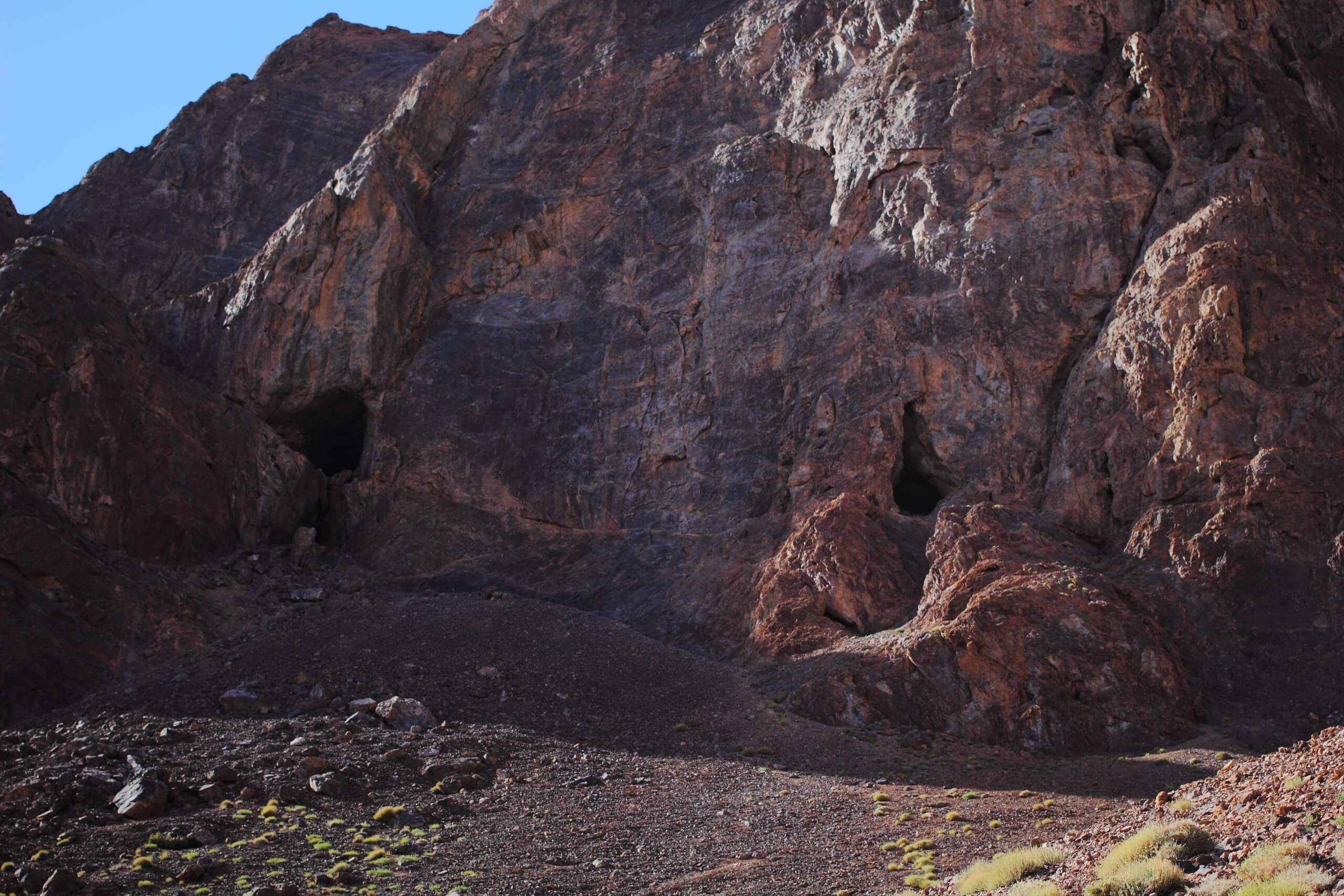 Our final week with Orozbek saw us head in to the South Alichursky mountains five kilometres from Zorkul, a lake which separates Tajikistan from Afghanistan. Our primary goal was to film the endangered argali sheep of which he and many other Kyrgyz in the region are avid hunters, both for sport and to sell the meat on the black market. Our own jaunt took us down a turn off south from the highway from Chamyr-Tash following the mostly dry Iri-Yak River up towards Koluchkol Lake.

The most prominent feature in the Koluchkol region was the magnificent and unclimbed Peak 5384 and an appealing granite ridge line snaking its way for 9km towards Peak 5361 which was out of view up the Chonkaradzhilga river valley. Aside from these two prime objectives, numerous other unclimbed peaks abound, I estimate eight primary summits sprouting in the vicinity of these two peaks, as well as within the Chokman and Kyulyuchsurdyu river valleys. 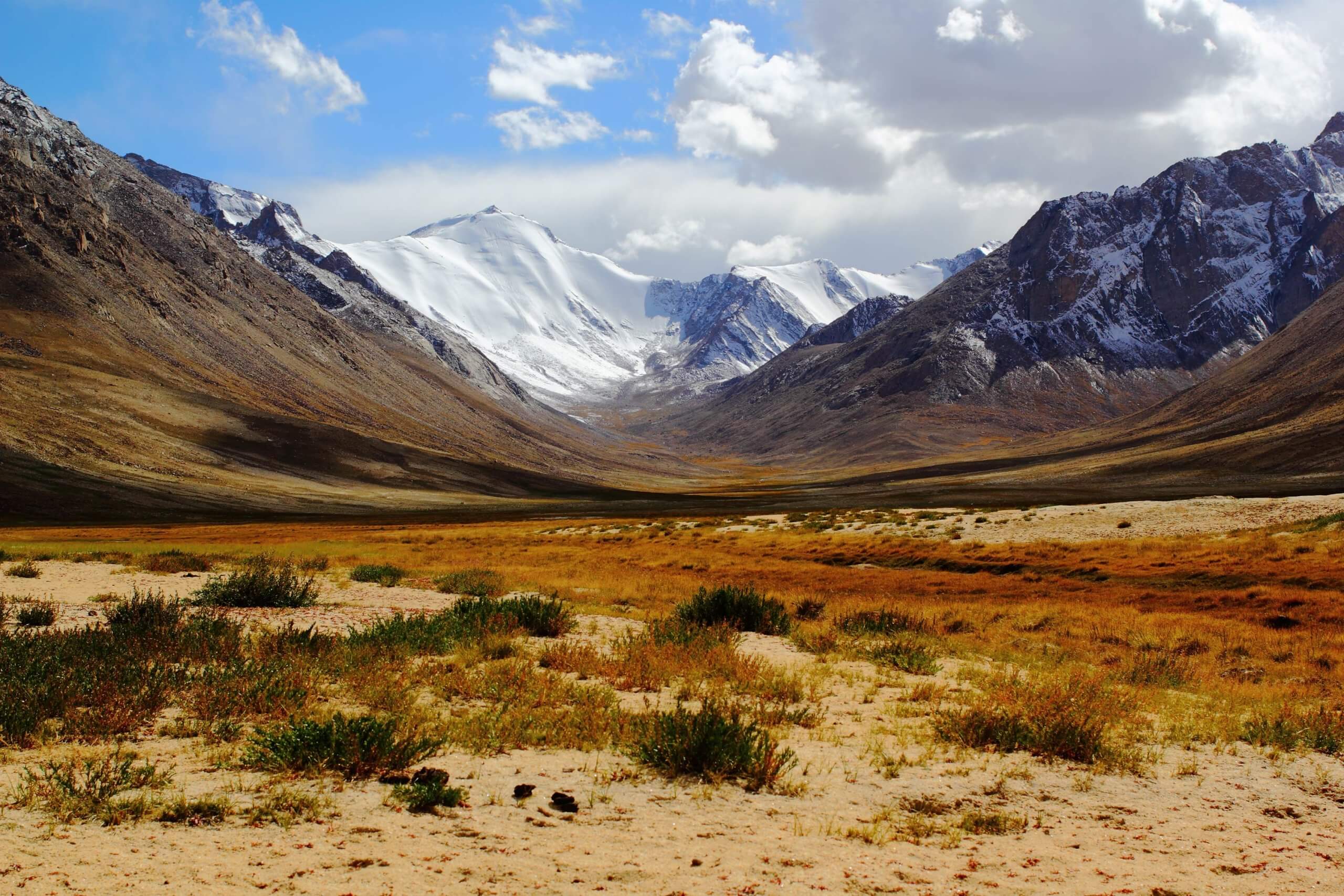 Whilst it was somewhat frustrating as a climber to be visiting these virgin realms without a rack or rope, it felt a real privilege to be able to document these regions, spend time with Orozbek and share my findings with likeminded individuals. Should you ever wish to plan your own expedition to the Alichursky Mountains, I strongly recommend paying a visit to Orozbek and liaising with the Murghab Ecotourism Association (META).

Acknowledgements: Thanks to Malgosia Skowronska for checking the Russian to English translation, Gulnara Apandieva and Tony Nelson of the META for their support and the other twenty-two sponsors of the wider One Steppe Ahead documentary film project.

Summary: A description of three virgin climbing regions within the North and South Alichursky Mountains of Eastern Tajikistan which were encountered by Matt Traver during a visit to the area to produce a documentary film about the life of a local hunter and herder.